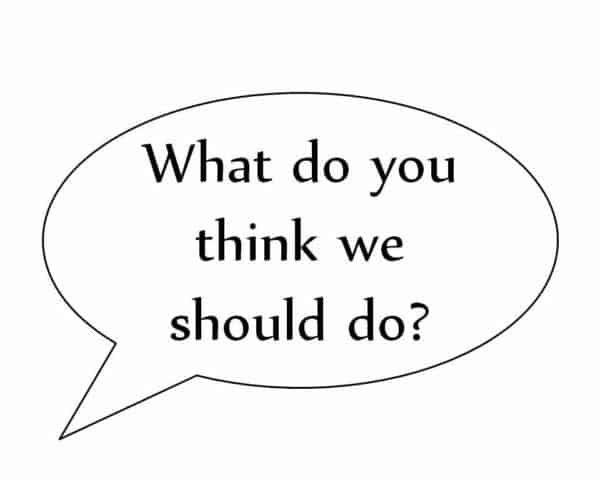 Read that again—"Ask, Don't Tell.” Now take just a couple of moments to think about what that is saying . . .

If you're like most people, a totally different response is elicited when you are told to do something versus asked to do something. While telling may result in compliance, it rarely results in commitment.

Rule #27 - Micromanaging is the deadliest sin for a manager.

What's amazing about rule #27 is that we all know it's true, and yet we somehow forget its importance when we are installed in a leadership position! Think about it. How many times have you seen a new leader put in to his/her role, and they immediately assume that they know everything? They take it upon themselves to establish their authority. They start telling people what to do. Folks, positions are given but respect is earned. And, folks, nothing will lose respect more than telling. And nothing will earn respect more than asking.

Normally, I like to highlight each rule with some sort of story, example, or deeper explanation. However, in this case I'm not going to do that. Rather, I'm going to ask you a favor. Can you think back on the times you have witnessed failures in leadership? What do you remember about how these leaders embraced their teams? Do you think they would have had more success if they spent a bit more time asking for input and listening to that input?

I skipped the example for two reasons. First, while stories are a wonderful way to convey a message, they're most powerful when people can relate to the story. By asking you to reflect on failures in leadership, after planting the seed of "Ask, Don't Tell", there's a high probability that you were able to tap your memory banks and come up with an example.

That's more powerful than just about any story I could craft. Second, it was a perfect opportunity to let you see (i) how to use "Ask, Don't Tell" and (ii) how effective "Ask, Don't Tell" is. Hopefully, you'll buy in to step #27. And what's the worst that could happen if you try today's action item?

ACTION ITEM 27 - For the next week you have to handle any situation you face differently. You're not allowed to tell anyone what to do or what you think. Rather, you have to ask at least three questions to better understand the situation. After asking the "three question minimum," ask the question "What do you think we should do?"

BONUS ACTION ITEM - Reread step 23 (Completed Staff Work) and ask yourself "How can I combine steps 23 and 27?" Some lightbulbs may come on when you complete this task!